Create an Account - Increase your productivity, customize your experience, and engage in information you care about.

Chapter 62, Article I, Sec. 62-10, of the Center Line Code of Ordinances states, in summary that no vehicles are to be parked on the city streets during a snow emergency.

During Winter Advisories and Storm Warnings, the City of Center Line Department of Public Works (DPW) and Public Safety Department have already begun preparing its response to ensure that all roads in the community are safe and clear of snow and ice.

The following information is provided to the public, for the effective and efficient response by the City during and after a winter snow/ice event.

During a winter snow/ice event, if roads are slick and there is indication of additional accumulation, the DPW will apply salt to all intersections in the city to ensure those areas are initially safe. City street snow plowing will begin only after 1.5-inch to 2-inches of snow has fallen, and will continue during the snow event until the snow stops falling and all streets have been cleared and salted.

Should the snow event be less than 1.5 inches, the City will apply salt when conditions allow.

Should the temperatures drop below 17 degrees, road salt is not effective, therefore the City will only remove snow once accumulation hits 1.5 inches, and apply road salt once temperatures rise above 17 degrees.

Residents and Businesses can help keep our streets clear by pushing snow from their sidewalks, driveways and approaches onto grass areas only, and not back into the streets. It is a violation of city ordinance to place any snow from private property onto a public street, by the property owner or their designated snow removal contractor. Property owners may be cited for any violations by them or their designated contractor.

It is highly recommended that property owners refrain from removing snow from their driveway approaches until after the City snow plows have cleared the streets.

Plowing of sidewalks will occur after 4 inches of snow accumulation. Residents and Commercial Businesses are still required to maintain safe sidewalks. Snow and ice removal and salting should be used to maintain a safe environment for pedestrians.

Please understand that sidewalk snow removal is not a priority during snowfall and accumulation of snow.

Snow emergencies may be declared by the city manager when 6 inches of snow accumulation is expected. Residents should watch the local public access channel for snow emergency declarations. The city website and Facebook page will also have information on a snow emergency. Should a snow emergency be declared, parking on any city street is prohibited, and may result in vehicles being towed at the owner’s expense.

Snow emergencies (including freezing rain and/or sleet) will be called by the City Manager on the basis of forecasts by the U.S. Weather bureau or other weather service when an accumulation of snow is expected such that parking of vehicles on the streets would restrict snow plowing and/or salting activities. Snow emergencies will be announced and terminated via cable television - Channel 5 of the Comcast Cable system and Channel 10 of the Wide Open West Cable system, unless streets are thoroughly cleared of all snow and ice from curb to curb. 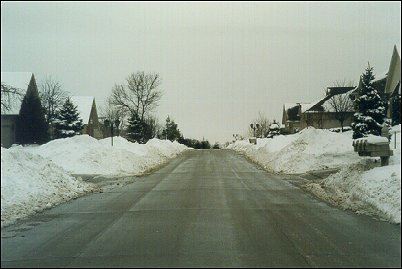 Vehicles remaining on the City streets during snow emergencies may be subject to towing and/or ticketing. Residents are asked to remove their vehicles from the city’s streets during a heavy snow fall, even if a snow emergency is not called, to allow DPW employees to thoroughly clean the streets of snow and ice. Parking on your lawn is permissible, but ONLY during an announced snow emergency.

Residents should be aware that, in order to thoroughly clear snow from the streets, it may be necessary for the snow plows to make several passes down each street, causing snow to be deposited in driveways. If at all possible, please wait until your street has been totally cleared of snow before clearing you driveway approach. This will eliminate the need to clear this area more than once.

Depositing of snow onto city streets is strictly prohibited. Violators will be prosecuted.

In accordance with City Ordinance and State Law (Public Act 82 of 1978), individuals and/or contractors are prohibited from depositing snow, ice and or slush in any roadway, intersection or City right-of-way so as to obstruct motorists vision or travel. Also, it is a violation of ordinance for contractors to deposit snow, ice or slush removed from business properties or parking lots onto private residential property.

All snow removal contractors working within the city limits of center line are required to obtain a business license from the city. This license can be obtained during normal business hours at the municipal building.

Winter brings with it lots of fun activities, like sledding, ice skating and skiing. But winter also means mounds of snow to shovel and layers of ice to remove from our sidewalks and driveways. We often make the job easier by applying deicers like salt. Besides sodium chloride, many deicers also contain chemicals like cyanide. When ice melts, the salts and chemicals dissolve and flow into street drains that lead directly to the river, endangering aquatic life. Here are a few tips to reduce salt use and prevent pollution year-round. Read the Citizen’s Guide to Cold Weather Practices (PDF) for more information.